How to Schedule an Exchange PowerShell Script in Task Scheduler 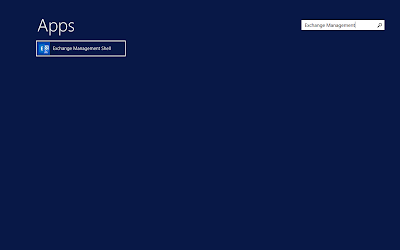 The Exchange Management Shell has Exchange specific PowerShell cmdlets. These Exchange cmdlets are not normally available in an ordinary PowerShell command environment. 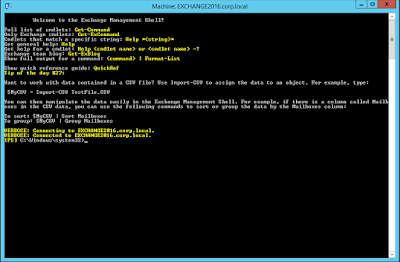 An example of what can be done in the Exchange Management Shell is to run a PowerShell script to list all the mailboxes on the Exchange server to a file. You can output columns based on display name, size of the mailbox, last logon, and other available mailbox attributes. 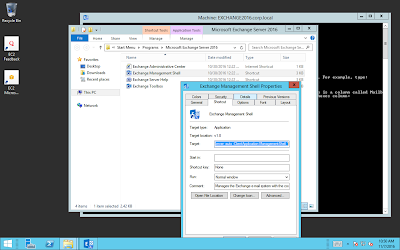 (Note: The above is ALL one line)

We are going to break it up into the components needed to schedule a task  in Task Scheduler like this:

Note: The above arguments are all on one line. The red writing above (c:\myscriptsfolder\myscript.ps1) should be the full path to the script that you want to run. Also, the above example is for Exchange 2016. You will need to check your Exchange Management Shell properties on your server to find the location of the RemoteExchange.ps1 file.


We need to remove -noexit from the arguments.

If left in there, the script will not exit after it finishes processing and the Task will be left "running". You will then need to end it manually before this same Task can run again.

When you create your task, in the New Action window, fill it out so it looks something like this. 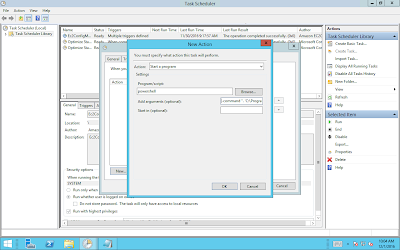 Popular posts from this blog

August 31, 2016
Elastic Load Balancing is a service which allows for the automatic distribution of incoming traffic across multiple Amazon EC2 instances.These EC2 instances should be in separate availability zones in a particular region.This enables applications to achieve fault tolerance and high availability if they are designed so that they can be accessed from multiple server instances. Sometimes an application may not need to be designed as such if they both point to the same data source. More often than not, these applications can be run from anywhere. They are good candidates to be put behind the Elastic Load Balancing service.It is up to the system or cloud administrator to ensure that identical versions of the application exist across all servers that are going to be load balanced. The Elastic Load Balancing service can be integrated with Auto Scaling in AWS. As more load is put on your application servers, additional EC2 instances can be launched by Auto Scaling.Once the load dissipates. E
Post a comment
Read more